Hoa Dung Clerget showed two wall-based works titled 'Broom Lady (Yellow Curve)' and 'Broom Lady (Red)' both made with straw from Vietnamese brooms, alongside documentation from a current installation in a shop front titled 'Flower from Nowhere', made from lotus seeds lit with pink neon lights.

The conversation initially revolved around the lotus seed installation, with much discussion about the effect of the pink lighting being visible during the hours of darkness. Some thought that this might lead to associations with the night time economy, and massage palours, or even sex shops. Others felt the use of pink referred more to the colour of lotus flowers, and to the wellbeing or beauty industry, particularly with the juxtaposition of many nail bars on the same stretch of high street. It was also noted that the shape of the hanging lotus seeds echoed a doorway, and that this elicited a tension between the domestic and the shopfront.

Ideas about the domestic realm were also raised in relation to the two 'Broom Lady' sculptures, although some felt that despite them being made from brooms, they also looked like pelts, or ritualistic garments, partly due to their very striking visual/physical presence. There was also a sense that all 3 works possessed a strong kinetic potential - regardless of their static presentation, they invited tactile interaction and animation.

Fyerool Darma shared a short video projection A Pantoum: Overwrite ‘A Famous Pantun’ and a number of small painting-type objects from his 'Screenshot' series. The discussion began with the group responding to the sensory overload of the video, with its eclectic mix of different formats and references, different languages/sub-titles and technologies layered together at frenetic pace. Some contributors felt it echoed with the experience of ADHD, while others likened the information overload to some kind of TikTok educational lecture.

The title and subtitles soon led to the identification of the Pantoum form, a non-Western poetry format, with a specific structure, which has been adopted by Western writers and poets since the 20C. The Pantoum is prescribed no specific origin or authorship, rather it is recognised as a product of its culture - in contrast to the named Western writers who have made use of it - such as Victor Hugo and Charles Baudelaire. Thus it was suggested that the work was a comment on cultural appropriation, especially as it featured so much material gleaned from multiple online sources.

This idea resonated with the painting-objects, which the group identified as printed screenshots, stretched onto canvas and heavily coated in layers of transparent resin. There was a suggestion that the shiny-ness of the resin echoed the reflective quality of the (computer) screen, but also that the familiar yet indistinct source material referred back to the impossibility of origins suggested by the video.

Hoa Dung Clerget is a Vietnamese artist based in London. "Whether painting, craft, installation, each work reflects a different temporal experiences. My research focuses around time, that of my practice and that of my works. The modalities of my activity draw an alternative where the need for inaction and the delay as a mean to be out-of-time remain important. The result is a way of doing between idleness and action, between leisure and labor."

Fyerool Darma is an artist based in London and Singapore. His objects and material experimentations are based on an extensive visual vocabulary drawn from popular culture, literature, the archives, the Internet and the artist's own life.

2. Participants handle some of the objects from the 'Screenshot' series.

3. Fyerool Darma and his video projected above. 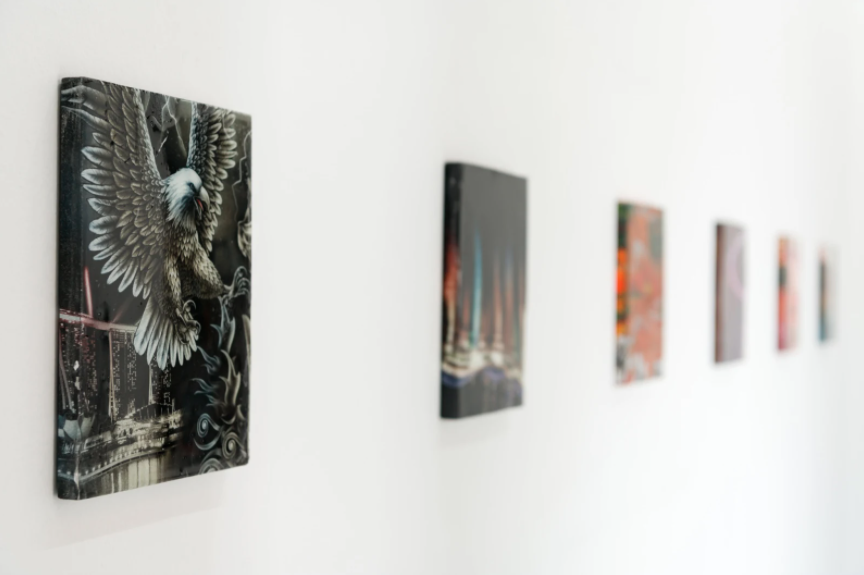 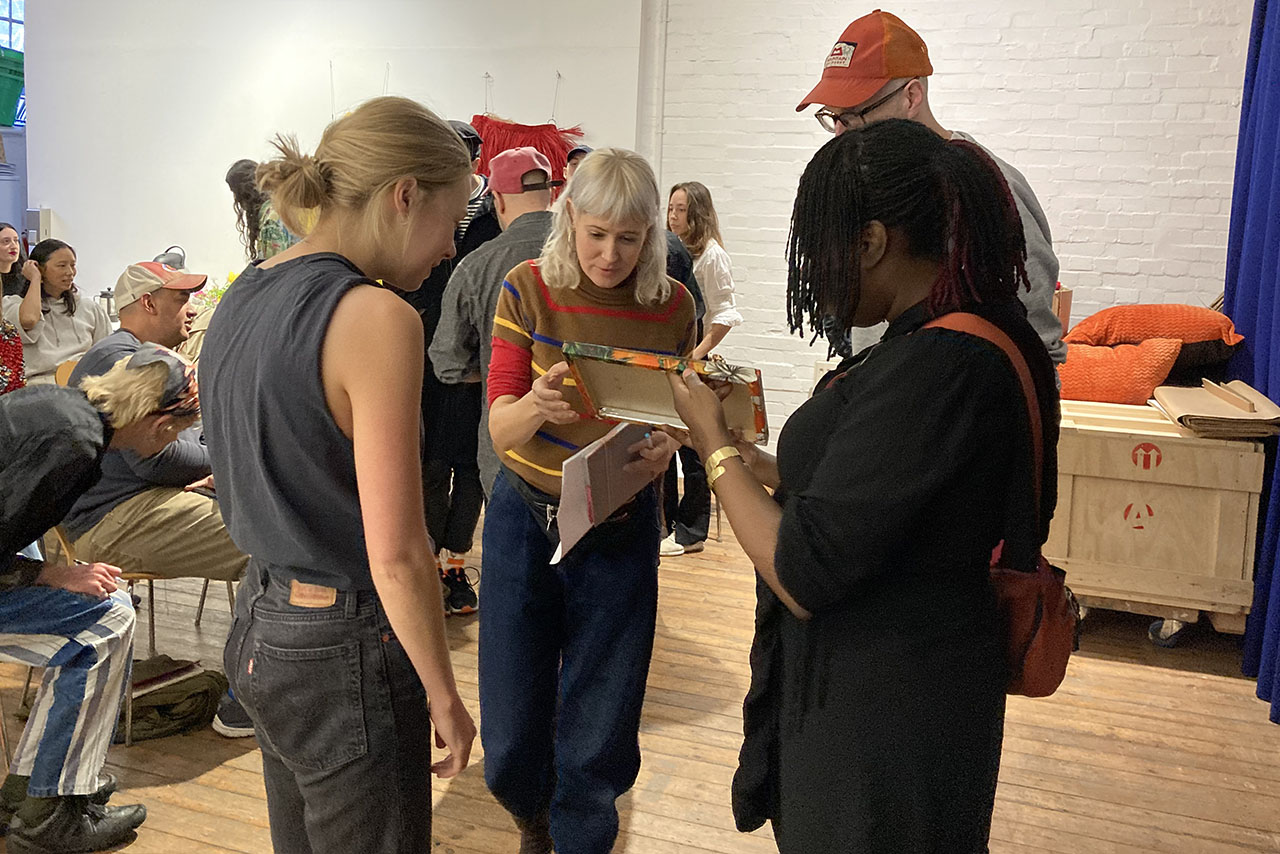 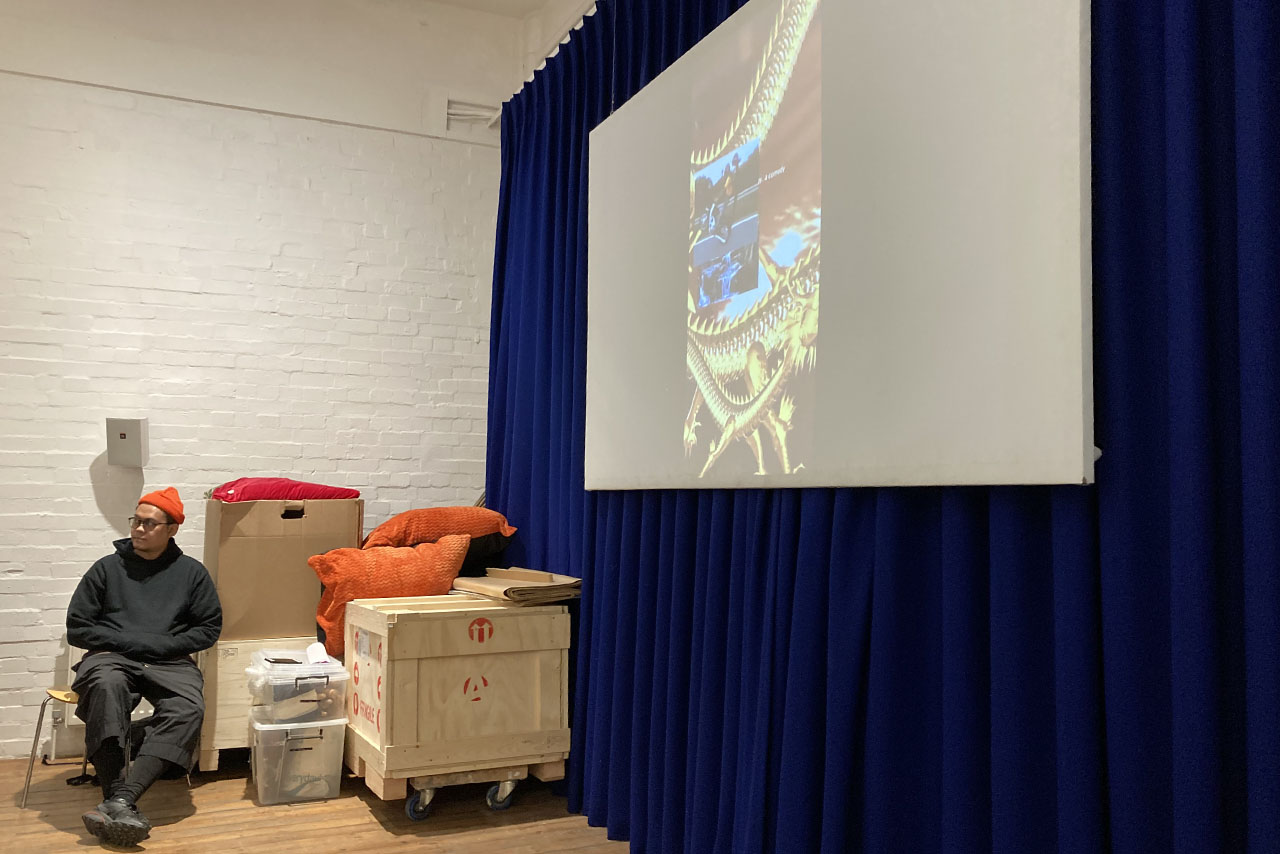 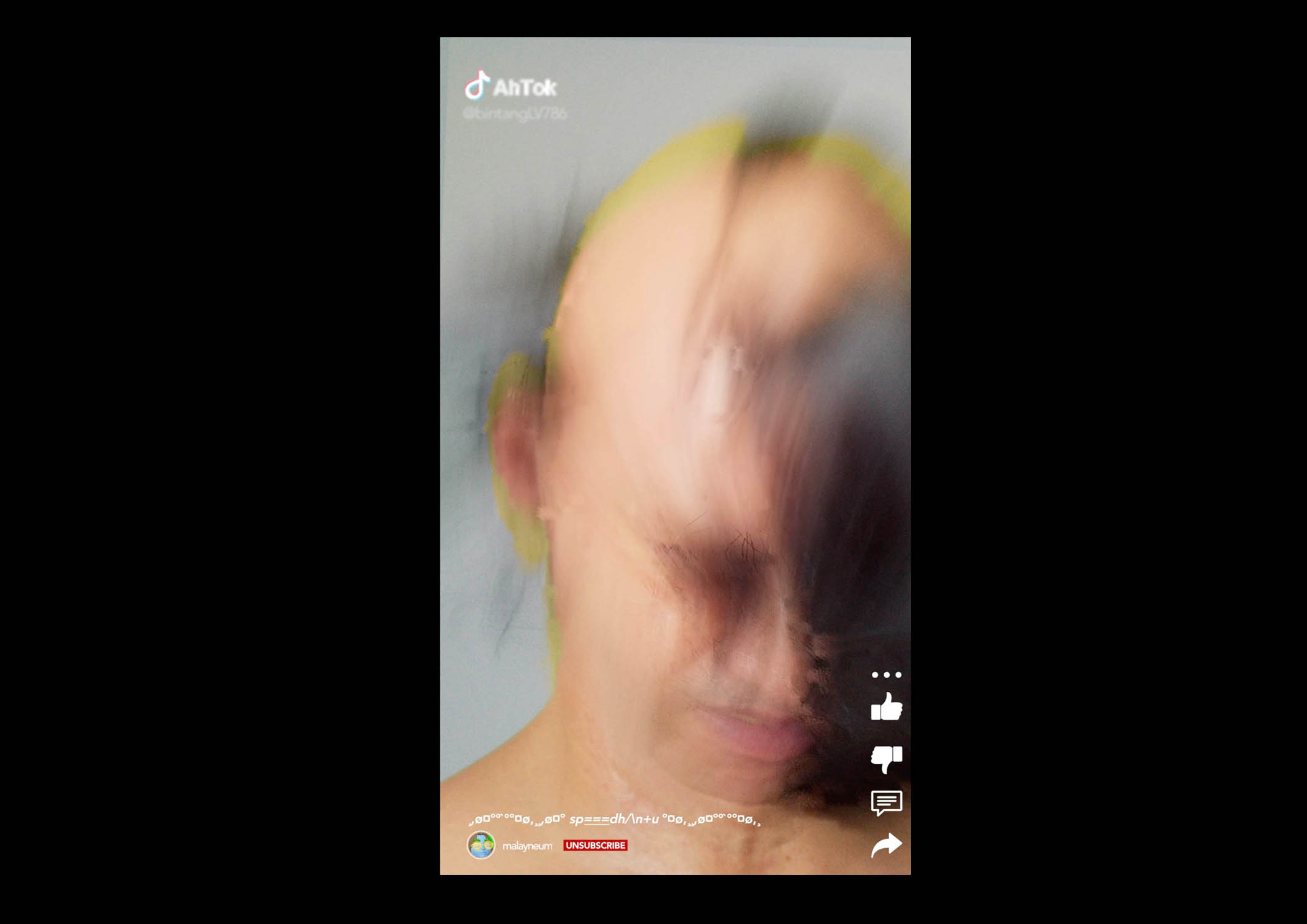 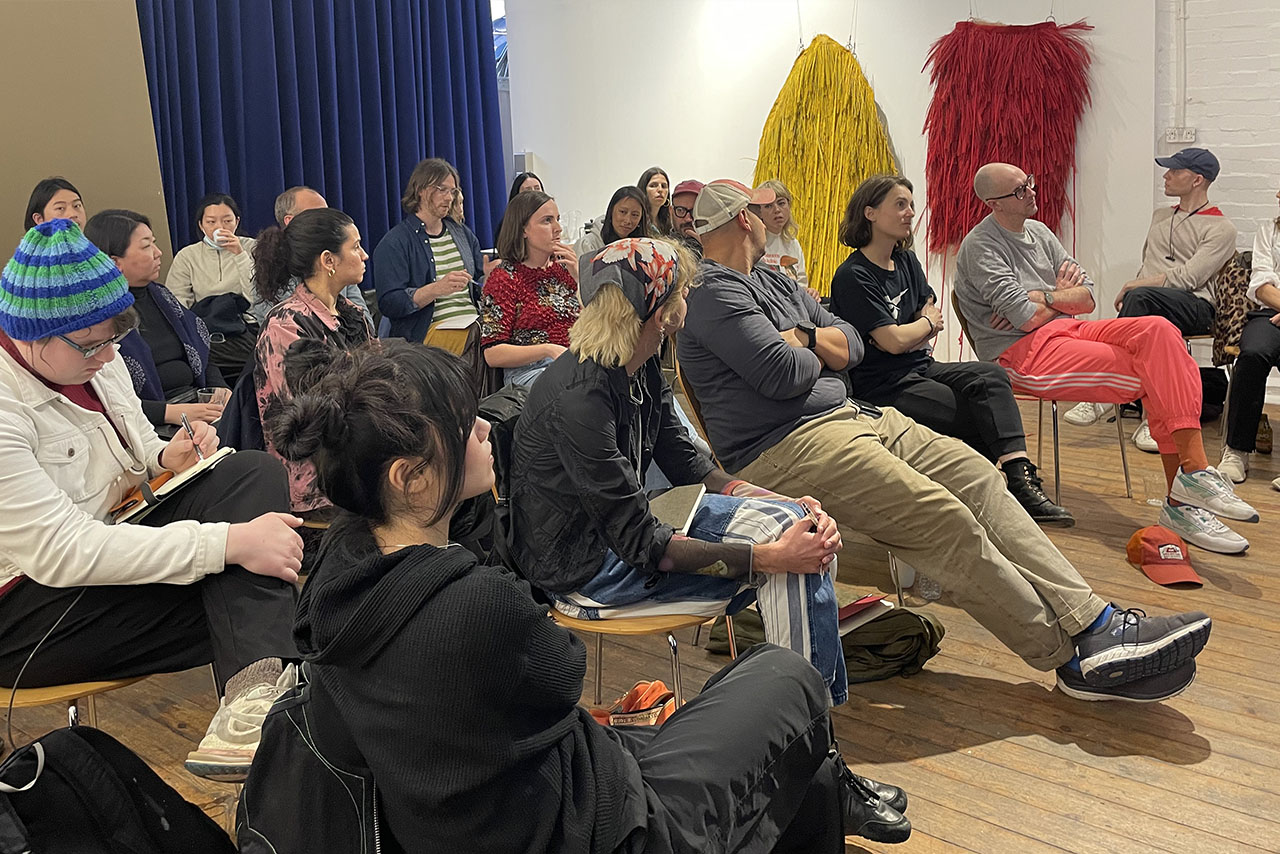 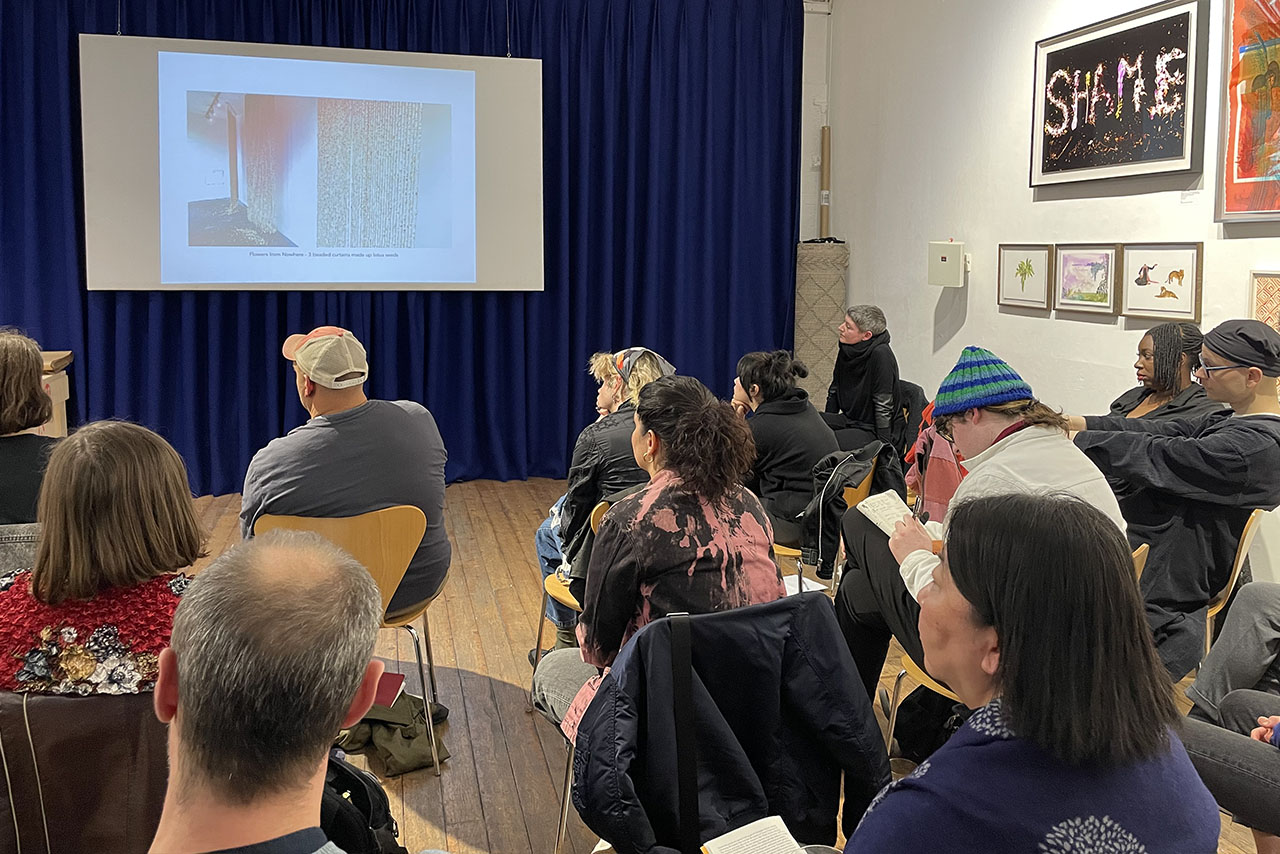 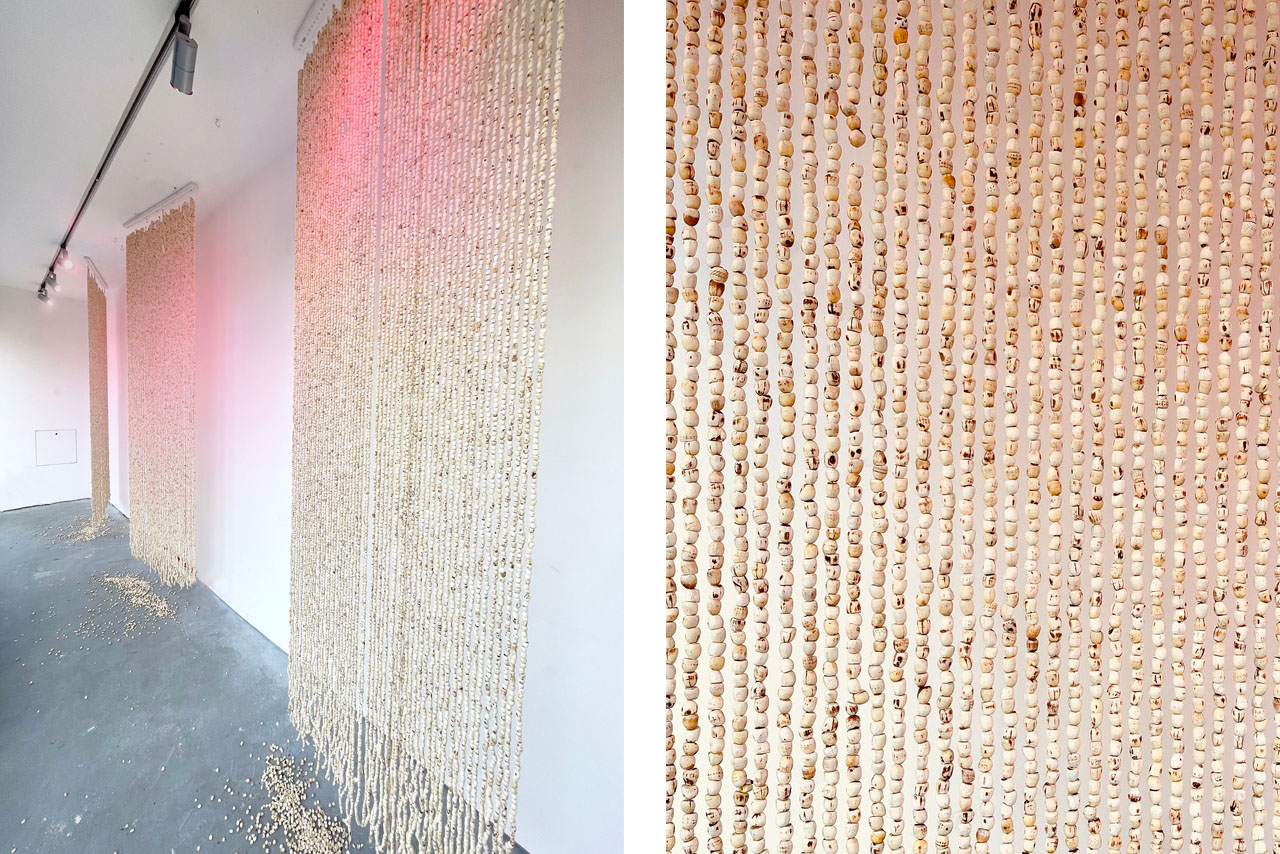